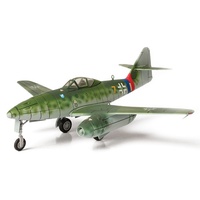 The world's first operational jet fighter, the Me-262 Schwalbe, was powered by two Junkers Jumo 004 B turbine engines and had sleekly swept wings and a powerful armament of four 30-mm cannons. With a top speed of approximately 869.4 kph (540 mph), the 262 was 193.2 kph (120 mph) faster than the famed North American Mustang at the same altitude and, although not so maneuverable, was able to engage in, or retire from, combat at will.

Conceived in 1938, the Me 262 was designed by a team led by Dr. Waldemar Voigt. It went through a long gestation period, not making its first flight until April 18, 1941, and then only under the power of a Junkers Jumo 210G piston engine of about 700 horsepower. Jet engine development, although more advanced in Germany than elsewhere, was still in a primitive state, and the turbine engines intended for the sleek fighter were not ready. On July 19, 1942, Flugkapitän Fritz Wendel made the first takeoff under jet power, and from that point on the Me 262 became a ray of hope in the increasingly dark skies of the German Luftwaffe.

The vastly superior performance of the Me 262 gave confidence to the fortunate pilots who flew it, but the Allied dominance of the air was so complete that the Schwalbe never reached its full potential. The airfields from which it flew were under constant attack, and in the last days of the war, the remaining Me 262 units were forced to operate from makeshift bases constructed along Germany's famous autobahns. Although 1,443 Me 262s were completed, it is estimated that only about 300 saw combat. The airplane was reportedly delightful to fly, as long as the pilot used care in moving the throttles to avoid an engine compressor stall.

Forces of Valor®  Messerschmitt Me 262 - JG 7 (Fighter Wing 7) is constructed in diecast and plastic. The landing gear's metal struts are constructed as complete subassemblies, and structural detail can be seen inside the wheel wells. Mounted on a solid metal wing, the engine features turbo fan and exhaust details. The access panel at the front of the model is removable, revealing structural details and four highly detailed 30mm cannons. The nose has four cannon ports with shell casing vents, and the metal fuselage features multiple antennas.