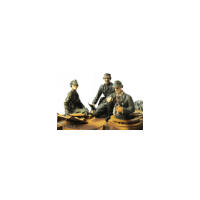 The Sturmgeschütz III (StuG III) assault gun was Germany's most produced armoured fighting vehicle during World War II.  It was built on the chassis of the proven Panzer III tank. Initially intended as a mobile, armoured light gun for infantry support, the StuG was continually modified and was widely employed as a tank destroyer.

The Sturmgeschütz III originated from German experiences in World War I when it was discovered that during the offensives on the western front the infantry lacked the means to effectively engage fortifications. The artillery of the time was heavy and not mobile enough to keep up with the advancing infantry to destroy bunkers, pillboxes, and other minor obstacles with direct-fire. Although the problem was well known in the German army, it was General Erich von Manstein who is considered the father of the Sturmartillerie ("Assault Artillery"). This is because the initial proposal was from (then) Colonel Erich von Manstein and submitted to General Ludwig Beck in 1935, suggesting that Sturmartillerie  units should be used in a direct-fire support role for infantry divisions. On June 15, 1936, Daimler Benz AG received an order to develop an armoured infantry support vehicle capable of mounting a 75 mm (2.95 in) artillery piece. The gun mount's fixed, fully integrated casemate superstructure was to allow a limited traverse of a minimum of 25° and provided overhead protection for the crew. The height of the vehicle was not to exceed that of the average man.

Daimler-Benz AG used the chassis and running gear of its recently designed Pz.Kpfw. III medium tank as a basis for the new vehicle. Prototype manufacture was passed over to Alkett, which produced five examples in 1937 of the experimental 0-series StuG based upon the Pz.Kpfw. III Ausf. B. These prototypes featured a mild steel superstructure and Krupp’s short-barreled 75 mm StuK 37 L/24 cannon. This model was known as the Sturmgeschütz Ausführung A.

While the StuG III was considered self-propelled artillery it was not initially clear which arm of the Wehrmacht would handle the new weapon. The Panzer arm, the natural user of tracked fighting vehicles, had no resources to spare for the formation of StuG units, and neither did the infantry branch. It was agreed, after a discussion, it would best be employed as part of the artillery arm.

The StuGs were organised into battalions (later renamed "brigades" for disinformation purposes) and followed their own specific doctrine. Infantry support using direct-fire was its intended role. Later there was also a strong emphasis on destroying enemy armour whenever encountered.

As the StuG III was designed to fill an infantry close support combat role, early models were fitted with a low-velocity 75 mm StuK 37 L/24 gun to destroy soft-skin targets and fortifications. After the Germans encountered the Soviet KV-1 and T-34  tanks, the StuG III was equipped with a high-velocity 75 mm StuK 40 L/43 main gun (Spring 1942) and later – the 75 mm StuK 40 L/48 (Autumn 1942) anti-tank gun. These versions were known as the Sturmgeschütz 40 Ausführung F, Ausf. F/8 and Ausf. G