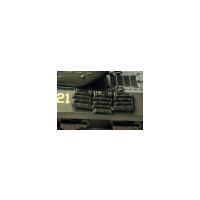 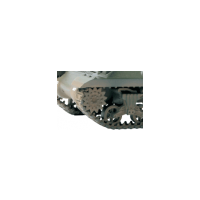 The M10 tank destroyer, formally 3-inch Gun Motor Carriage, M10 was a United States tank destroyer of World War II based on the chassis of the M4 Sherman tank. It was numerically the most important U.S. tank destroyer of World War II and combined a reasonably potent anti-tank weapon with a turreted platform (unlike the previous M3 GMC®, whose gun was capable of only limited traverse). Despite the introduction of more-powerful types as replacements, it remained in service until the end of the war. The U.S. combined-arms doctrine on the eve of World War II held that tanks should be designed to fulfill the infantry support and exploitation roles. The anti-tank warfare mission was assigned to a new branch, the tank destroyer force. Tank destroyer units were meant to counter German blitzkrieg tactics. Tank destroyer units were to be held as a reserve at the Corps or Army level, and were to move quickly to the site of any enemy tank breakthrough, maneuvering aggressively to destroy enemy tanks. This led to a requirement for very fast, well-armed vehicles. Though equipped with turrets (unlike most tank destroyers of the day), the typical American design was more heavily gunned, but more lightly armoured, and thus more manoeuvrable, than a contemporary tank. The idea was to use speed and agility as a defense, rather than thick armour, to bring a powerful self-propelled gun into action against enemy tanks.

The M10 used a Medium Tank M4A2 chassis (M10A1s used M4A3 chassis) with an open-topped turret mounting a 3" gun M7. This gun fired the Armor Piercing M79 shot that could penetrate 3 inches of armour at 1,000 yards at 30 degrees from vertical. Other ammunition carried throughout its service life included the Armor Piercing Capped Ballistic Cap (APCBC) M62 projectile, High Velocity Armor Piercing (HVAP) M93 shot, and Armor Piercing High Explosive (APHE); 54 rounds of 3-inch ammunition were carried. The rear of the turret carried two large counterweights which gave it a distinctive shape. The main shortcoming of the M10’s 3 inch cannon was its APHE round, which was the round most commonly used for engaging tanks. The 3 inch APHE round was based on the naval 3 inch round and had a small charge in the rear of the round which was supposed to explode after penetration of the targeted tank's armour plating. Unfortunately it was discovered that it exploded on impact or shortly thereafter, causing the round not to penetrate. It is still a puzzling mystery as to why this problem was never addressed with a better base fuse or by deleting the small HE charge in the rear of the round. This was also the problem with the towed version of the 3 inch cannon, the M-5, in the antitank role.

A .50-caliber Browning M2HB machine gun could be mounted on the top rear of the turret for use against enemy infantry and for anti-aircraft use, along with 1,000 rounds. The crew were also equipped with their personal weapons for self-protection

The M10's open-topped turret left the crew vulnerable to artillery and mortar fire as well as infantry close assault, especially in urban combat and wooded areas. By the end of the war its armour was too thin to provide protection from the newer German tanks and anti-tank guns. The other main disadvantage of the M10 was its very slow speed of turret rotation, as the turret traverse was unpowered and the crew had to hand-crank the turret around. It took approximately two minutes to rotate a full 360 degrees. U.S. tank destroyers fired many more high-explosive shells than anti-tank ammunition, indicating that they were employed much like the tanks they were supposed to support.

On 24 & 25 July, the 30th received one of the most devastating friendly fire incidents of the war. An armada of U.S. Army Air Corps bombers from England were sent to carpet bomb the battlefield in preparation for the 30th to move forward. Red smoke shells were fired to mark the area for the planes to attack. However, a sudden wind blew the smoke in the wrong direction, and the bombs began falling on the heads of the U.S. soldiers. This happened on both days, with totaling over 100 casualties including Lt. Gen. Leslie McNair.

Forces of Valor® 1:72 scale replica is of a U.S. M10 Tank Destroyer that was attached to the 30th Infantry Division then deployed to France.