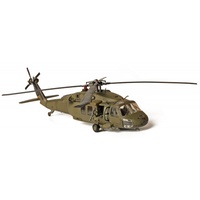 The UH-60 Black Hawk™ is a four-bladed, twin-engine, medium-lift utility helicopter manufactured by Sikorsky Aircraft. Sikorsky submitted the S-70 design for the United States Army's Utility Tactical Transport Aircraft System (UTTAS) competition in 1972. The Army designated the prototype as the YUH-60A and selected the Black Hawk™ as the winner of the program in 1976.

The UH-60A entered service with the Army in 1979. This was followed by the fielding of electronic warfare and special operations variants of the Black Hawk™. Due to weight increases from the addition of mission equipment and other changes, the Army ordered the improved UH-60L in 1987. The new model incorporated all of the modifications made to the UH-60A fleet as standard design features. The UH-60L also featured more power and lifting capability with upgraded T700-GE-701C engines and a stronger gearbox as a result its external lift capacity increased by 1,000 lbs. (450 kgs) to 9,000 lbs. (4,100 kgs). The UH-60L also incorporated the Automatic Flight Control System (AFCS) for better flight control due to handling issues with the more powerful engines. Production of the L-model began in 1989.

Modified versions have also been developed for the U.S. Navy, Air Force, and Coast Guard. In addition to U.S. Army use, the UH-60 family has been exported to several nations. Black Hawks have served in combat during conflicts in Grenada, Panama, Iraq, Somalia, the Balkans, Afghanistan, and other areas in the Middle East.

Forces of Valor® UH-60 Blackhawk™ is produced in die cast and plastic which allows for extra detail.  The top portion of the fuselage is constructed from die cast metal, with the bottom portion reproduced in plastic to allow for maximum detail. Crew figures can be seen beneath the green house canopy, and a fully rendered cargo bay can be viewed through side windows. The rotors spin and the rotor head assemblies are highly detailed, as are the turbine engines visible inside the opening engine panels. The model is armed with two M60 machine guns on either side of the fuselage. 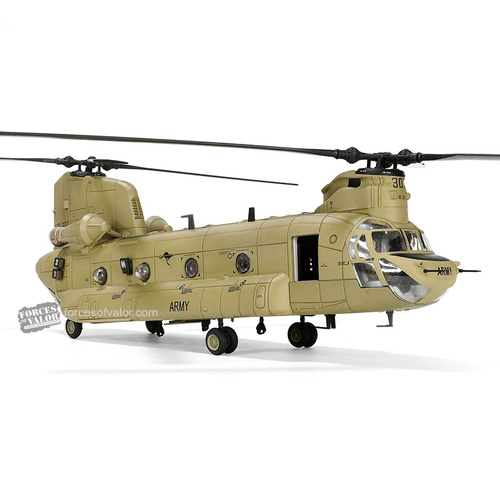