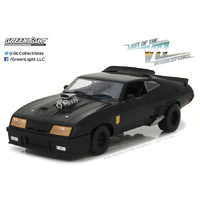 The Interceptor came with a 351 Cleveland, 4 speed manual transmission and a 9" Diff.

Mad Max and Road Warrior fans must add this replica replica to your collection. The model is made of diecast material with chrome parts and rubber wheels and comes in window box packaging.'

The Interceptor came with a 351 Cleveland, 4 speed manual transmission and a 9" Diff.

The drive-train was kept along with most of the original interior (except for steering wheel, dash light, blower switch, and overhead console), and thus mostly body modifications were made.

Front modifications include a nosecone called a "Monza".

Trunk spoiler is not the same as the Cobra spoiler.

Remaining body kit was entirely custom made, no "off the shelf" parts were used. The roof spoiler and wheel arch flares were hand made items which were moulded into the body, and so they were never actually available as consumer items.

Another addition to the black car was a Weiand 4 - 71  Supercharger poking through the bonnet. This supercharger had a real Scott injector hat (now a nostalgic drag racing piece) sitting above it, all of this was not functional in real life. The internal rotors were removed , and it sat on a stand above the block. When the button on the gear lever was pulled it fed the gas/air mix to the engine. You will also note that the Interceptor had side pipes, or "zoomies". Eight tips in all, yet only a couple (the rear ones) were actually functional.

The wheels on the Interceptor were Sunraysias, 8 spoke design.