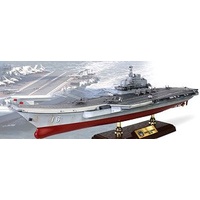 Liaoning is a Chinese Type 001 aircraft carrier. The first aircraft carrier commissioned into the People’s Liberation Army Navy Surface Force, she is classified as a training ship, intended to allow the Navy to experiment, tain and gain familiarity with aircraft carrier operations.

Originally laid down in 1985, she was built by the Black Sea Shipyard, the sole manufacturer of Soviet aircraft carrier, the other one was named varyag, which had never been completed due to the dissolution of Soviet Union in 1991, the stripped hulk including drawings were eventually sold by Ukraine in 1998 and towed to the Dalian Naval Shipyard located in northeast China.

After a decade long of refitting and deploying latest technology into the ship, on 25th September 2012, the Liaoning C-16 aircraft carrier was classified with designation of Type 001 in in the People’s liberation Army Navy, she was intended as a training ship, allowing navy to gain various knowledge’s towards aircraft carrier operations. The Lianoning aircraft carrier was finally announced to be combat ready in November 2016.

Meticulous details on carriers fighter jets and helicopters surface, even including panel lines!