GANNET PRO PLUS DRONE WITH VISION 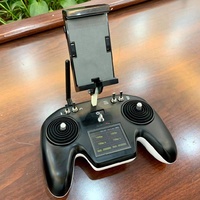 PLEASE NOTE, THIS IS A PREORDER PRODUCT, YOU ARE GETTING A PREORDER DISCOUNT BY ORDERING NOW!
WE CANNOT GAURENTEE SHIPPING DATE HOWEVER WE EXPECT mid OF JUNE

✅ Fully waterproof drones that can fly even in heavy rain

✅ Powerful with payloads up to 3,5kg

✅ LCD display for drone telemetry, battery, and GPS status, use with or without a smartphone, the Gannet Camera is an optional extra, Full HD (1080p) live video from the gimbaled camera so that it can be used as an effective search and rescue drone with clear live HD video

We took on the challenge to create something which met all of the above goals to create a truly unique and market-leading product.

Drones, especially waterproof flying drones have a unique challenge in the sense that they use barometric pressure to control their altitude/hight. To this end, they must breathe and displace roughly as much as 20% of their internal air volume during each flight. As the electronic components and battery heat up the internal air expands in volume and the excess volume needs to be pushed out of the drone’s sealed shell.

All other existing “waterproof” drones make use of a breathable cloth/paper-like membrane through which the air is expelled. This membrane method is used as there is no current mechanical means (valve) that allows bidirectional free airflow but seals water flow off and reopens as soon as there is no water present.

Once the drone starts to cool down, say when it starts to rain or when it lands in the water, or even just at the end of each flight, the air cools down and contracts and at this point new air is drawn into the drone by the vacuum formed from the contracting air and components, the same happens each time the drone descends, the external barometric pressure goes up and air is forced in. If the membrane is wet at this stage it becomes a barrier to free air movement but despite this barrier, the vacuum will still draw water and or water vapor into the drone and electronics compartment causing long term damage. This wet membrane is a significant barrier to free airflow that retards the heating/expanding air from escaping the drone freely causing the internal pressure to rise which in return gives false readings to the flight controller resulting in the drone’s unintended and undesirable gain in altitude.

To address this unique challenge each Gannet is fitted with a flexible internal flight bladder. The concept is incredibly simple, and very similar in nature to a fishes swim bladder, a short a tube is connected to a strategically placed and shielded opening to the exterior of the drone, this tube is then connected to the flight bladder, which at rest has approximately 20% of the drones internal volume in it. As the drone heats up the air expands, this pushes on the outside of the bladder and forces the air in the bladder out through the opening decreasing the bladder size.

Any air that is drawn back in when the drone cools down or changes altitude simply fills the bladder through the tube and can never reach the electronics. It does not matter what moisture content is in the ”air” as all that matters to the drone is displaced volume, which function the flight bladder fulfills effortlessly. Should water be drawn in at this stage it would simply run out at a later stage and be replaced with air once out of the water. This unique and patent-pending design ensures that the electronics will never see the external environment, be it humid air, rain, snow, salt spray or ocean water. The electronics stay dry at all times and with perfectly balanced barometric pressure this ensures stable flight without uncontrollable altitude gain as is the case with all other “waterproof” drones.

At the outset, we designed these drones to be load carrying, be it a life vest on a SAR (search and rescue) mission, a bait for fishing or an external battery for extended flight times.

The LARGER Gannet Pro is rated to lift and fly with loads up to 3.5kg (7.7lbs) payload.

These bigger loads draw heavy on the drone’s battery and limit flight time to a great extent but even so the Pro + can fly a lifesaving tow line out to a person in trouble several hundred meters from shore. For the land-based fisherman in New Zealand, it can take out a kontiki line for as far as the eye can see.

Many drones are used for fishing and one of the biggest drone sinkers is when the line gets snagged or when a seagull or pelican hits the line whilst the drone is on its way out with the line. Solving this problem was easy, this was done by fitting each Gannet Done with the patented Gannet XSport dual electromechanical release. What this does is give the user the ability to set the release to auto-release on a given setting. So if 1kg is flown the user may set the release to 1,5kg so as soon as a bird hits the line it simply unclips saving the drone, and if a precession drop is required simply press the button on the remote and the electrical side releases the load on command.

This release is not exclusively for fishing as it can also be used when flying out a lifeline/ lifevest to a person in distress. The drone can lower the strap to him and when he tugs on the line it will unclip. Or one can even pull them to shore with the drone itself knowing that the drone is safe and will free itself if the load gets too much.

Gannet has been making drone release systems since 2016 for all major drone makes so it only makes sense that the best possible release would be fitted to the Gannet Pro +. The Gannet XSport has several granted and also pending multinational patents making them the worlds only failsafe electro-mechanical release systems. The Gannet Pro + drones have been designed as short-distance delivery drones, unlike most other drones that are symmetrical camera platforms, with a camera hanging from the bottom and able to fly at near identical speeds in any direction, the Gannets are streamlined to fly forward significantly faster and with less power usage than most camera platform drones.

As a result, Gannet Drones are unmistakably recognizable and very unique in shape. This came about as a result of placing the gimbal and GPS far upfront in the head with sweeping aerodynamic arms. Resembling a skydiver or perhaps even a flying penguin. When hovering in place the elongated body is slanting backwards this so that when the body is horizontal the drone is already travelling forward at speed. This results in the smallest possible frontal area cutting through the air conserving battery power as much as possible. The keen eye will notice that nothing is straight on these drones, not one of the motors line up, the slanting body and curved asymmetric arms all contribute in making these some of the most power-efficient drones to be brought to market.

In the natural world, animals have adopted colours that blend into their environments, be they hunters or prey. The Great White, killer whales, penguins and even some seagulls are all light below and dark on top. This to help blend in when viewed directly from above or from below in their 3-dimensional worlds. However, the two contrasting colours actually increase visibly when viewed from the side and this is why our Gannets are black and white. They stand out in any weather conditions at very long distances, making the visual line of sight flight to long distances more enjoyable. Alongside with the colour scheme comes the asymmetric shape making it easy to see which the way the drone is facing.

The one thing that needs to be changed/charged in the field on a regular basis is the Lithium Polymer battery. For this, we placed the battery in its own waterproof compartment opening at the back of the drone.

To ensure ease of installation we created an easily accessible compartment in the back of the drone, sealed off from all internals. In the event that some sand compromises the seal only that compartment would seep with water and only the battery is exposed and not the expensive electronic internals.

The Gannet's double waterproof compartment design is unique to the Gannet Drone which makes them the safest waterproof drones on the market.

The camera is not intended for professional videographers or photographers as it is 2k 1080p) in resolution.

Its intended use is for clear live view to aid in SAR missions or for spotting fish when fishing. However, if 4K video is desired additional cameras can easily be fitted to several of the auxiliary mounting points. The remote control, like the drone, is focused on function. Splashproof, rainproof and sand-proof make it ideal for use on the beach or boat in any weather, even snow is no problem at all. The control sticks and switches are sealed off with rubber bellows making sure that sand and dirt can’t jam them up, as is so often experienced with standard controllers. With a built-in LCD display providing the operator with everything they need such as the drone’s vital telemetry, distance, hight, drone battery and GPS satellites. With this, the Gannet can be flown without connecting a smartphone or tablet. Connecting a smart device through the Gannet app to the drone provides a high definition display for video feedback and realtime map location. This also then stores the flight logs and history in the App.

With the main market for Gannet drones being people that will be away from their home base, all Gannets come with a battery charger that can recharge the battery in about 1hour from a 12V DC battery or 110V-240V AC power outlet making field charging easy and convenient.

This item is not eligible for coupon discounts.